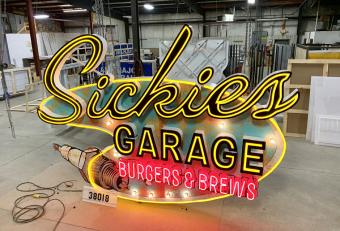 Sickies Garage is a North Dakota-grown series of restaurants that specializes in gourmet burgers and cold beer. The establishments are modeled after pure mid-twentieth century Americana—a themed mix of “classic American diner” with “classic American car garage” with just a “shake” of “greasy spoon.”

But don’t let the “greasy spoon” connotation turn you off. Ever since opening their first location eight years ago (in Fargo), Sickies Garage has won numerous awards with their freshly made extreme burger creations and craft beer pairings.

Today Sickies Garage restaurants can be found in seven locations across North Dakota, South Dakota, Nebraska, Nevada, and Minnesota. The Sickies Garage owners were looking for new, illuminated, exterior, identity signage to mount at their locations that would reflect their branding and help them stand out even more. The Fargo-based Starmark Hospitality sign company was in charge of putting this sign project together and installing it, so they contacted ESCO Manufacturing, a wholesale nationwide company based in Watertown, South Dakota that specializes in illumination and customized signage.

ESCO Manufacturing has been in business for over five decades now (starting up in 1965). They are a family-owned company, and Stuart Stein recently took over as a third-generation owner earlier this year (following in the footsteps of his grandfather Clint and his father Mark.)

They pride themselves on “helping their clients every step of the way—from conception of artwork and fabrication all the way to shipping.” (Note: To learn more about the company, be sure to check out “Navigating Through the Channels” appearing in our November 2018 issue.)

ESCO Manufacturing had supplied lighting for Starmark on several prior sign projects. “They liked the way those turned out so they asked us to help with their signage here,” says Alex Artibee, sales manager at ESCO Manufacturing. 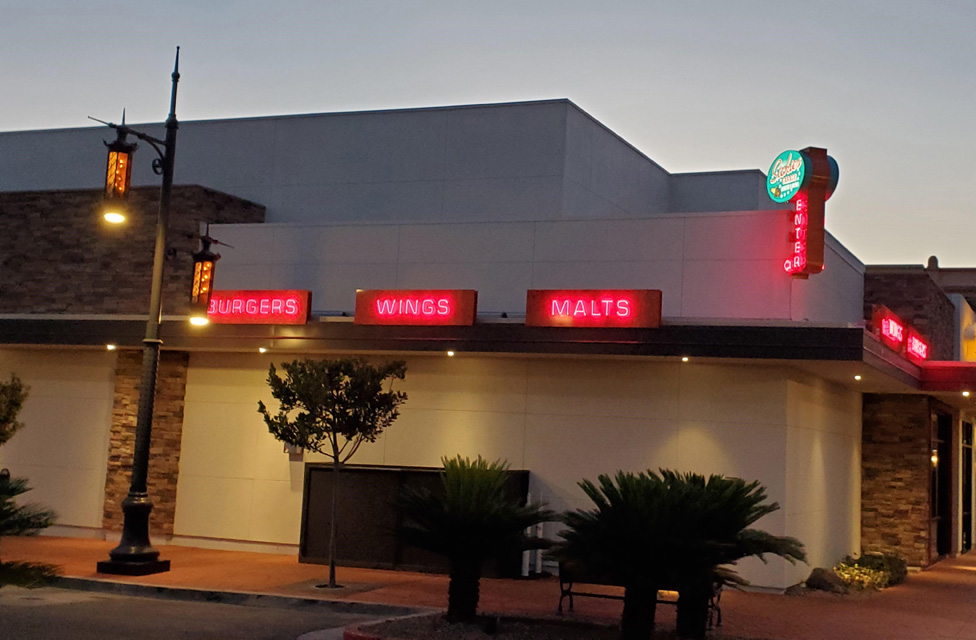 All the Sickies Garage restaurants feature a mix of new illuminated exterior signage.

The end-results are various signs that feature a combination of LED- and neon-illuminated lettering, dimensional elements, and vinyl graphics. One features a set of neon letters spelling out “burgers” and fries,” another is shaped as a downward directional arrow with a vinyl-covered aluminum cabinet atop it, and another features a mix of exposed illuminated lettering combined with a vinyl graphic of the Sickies Garage sparkplug. “The looks and designs of the signage changed due to the various sign codes involved,” says Artibee.

The finished signs feature a combination of lighting technologies—12mm Ruby Red coated neon from Tecnolux and QuickMod2 LED modules from Principal LED. “During the initial design of this sign, we wanted to really highlight and draw attention to it via exposed neon and the color of it,” says Artibee. 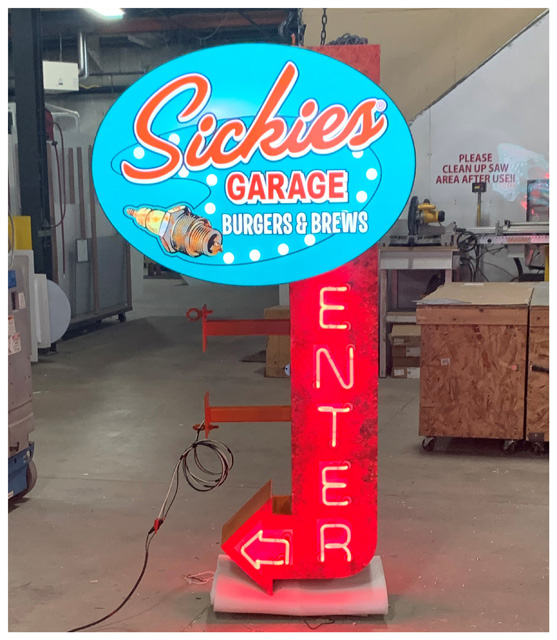 One sign style features a Sickies Garage logo printed onto 3M IJ3650 clear vinyl and mounted second-surface to the back side of the acrylic face with a downward-facing arrow featuring the word “Enter” in ruby red neon.

At the project’s outset, ESCO Manufacturing collaborated with the Starmark Hospitality sign company on the lighting design for these new identity signs. Since Sickies Garage requested a very stylized script for its signage font, neon proved the obvious choice to realize this.

“Neon has a specific style onto itself that, when used in the right way, can really accentuate the style of the sign that it’s attached to,” says Artibee. “Neon really just gives it that stylized look.”

Early on, they knew they were going to need to change the core spec of the signage in order to maximize their vision for the quality and visibility of the lighting. “We wanted to pick a neon color for the signage that would really stand out and still go with the overall feel of the restaurant,” says Artibee. “Ruby Red seemed to fit perfectly.

The finished identity signs feature a mix of substrates and materials. One sign style features a Sickies Garage logo printed onto 3M IJ3650 clear vinyl and mounted second-surface to the back side of the acrylic face with a downward-facing arrow featuring the word “Enter” in ruby red neon. It is attached to a twelve-inch-deep cabinet. According to Artibee, the structure itself is two-by-two aluminum tubing with square tube aluminum stub outs connected to 1/4-inch aluminum mounting plates. They also used an aluminum skin with a digital vinyl print for the faces.

The 12mm Tecnolux Ruby Red coated neon was added to the sign pieces with 1.5-inch risers while the Principal LED QuickMod2 modules were attached inside to aluminum tubing using double-sided tape, screwed to the framing, and attached with silicone. “This was all done to UL specs for outdoor usage,” confirms Artibee. 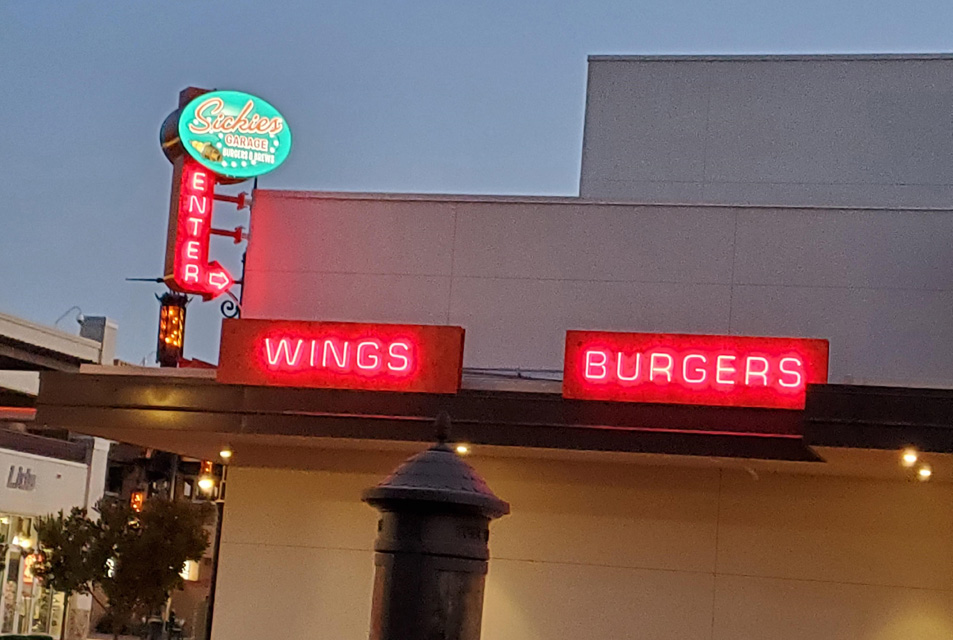 ESCO Manufacturing assembled the entire sign at their facility (including attaching the lighting components). Once everything was done fabrication-wise and assembly-wise, they placed the pieces in standard wood crating and shipped it to the site via a dedicated truck to minimize handling.

They made sure all the transformers and power suppliers were all self-contained in the signage. “The signs were installed by a local installer who bolted them through the mounting plates to the building itself,” says Artibee.

Artibee says that there are some rules and design ideas to keep in mind when it comes using neon and LED illumination. “For proper internal illumination, it’s ideal to keep the signage five to seven inches in depth,” he advises. “For the exposed neon tubing, we like the one-and-a-half-inch tube supports, which provide a nice glow effect.” 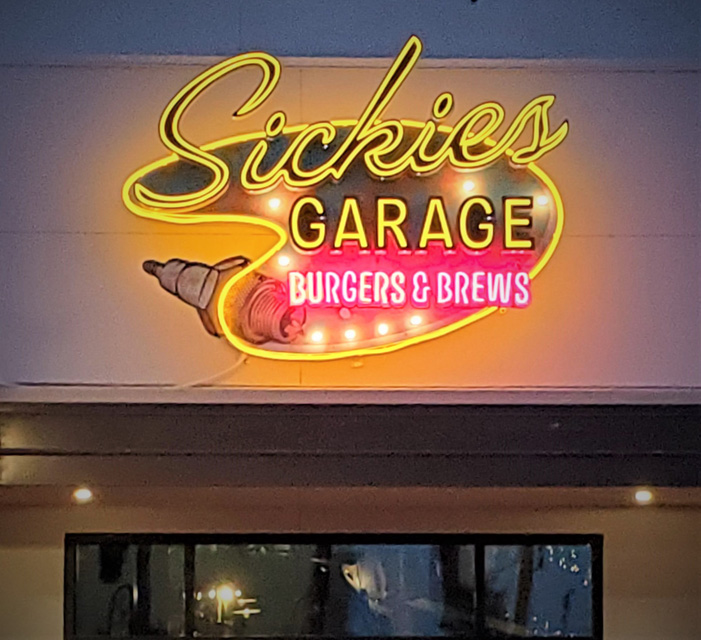 All the transformers and power suppliers were all self-contained in the signage.

The even better news is that, when it comes to a sign like this, Artibee says that there isn’t much upkeep that needs to be done on the customer’s end. “We do recommend a photocell or timer for daytime/nighttime to maximize lifespan and minimize utility usage,” he says.

ESCO Manufacturing ended up working closely with four different teams to make this illuminated sign project a reality—the architect, the designer, the sign company installers, and the restaurant owner. “With this many ‘cooks in the kitchen,’ it was helpful to utilize video conferencing so we could have effective communication to get this done,” says Artibee.

Sickies Garage is already famous for their burgers and their beer, and there’s no doubt that they’re about to add more accolades to their portfolio thanks to the installation of these attention-grabbing mixed media illuminated signs. Order up!

Company News
Our company has used ESCO Manufacturing for many years for our wholesale electric sign needs. They have manufactured many different types of signs for us over the years. We have had the same sales rep for many years. That says a lot in itself about the company. They have never let us down and always delivered a quality product in a timely manner. They are very competitive and always have great ideas to help us with design and installation. I highly recommend them, they won't let you down
Justin Helmke
JH Signs
Our account rep has been with us from the start of All State Signs. Throughout the years we have come to rely on ESCO's extensive product knowledge and fast turn arounds to fill our customer needs. ESCO has always been a reliable source for our company, and as we grow, we will continue to rely on their terrific customer service and quality products.
Beau & Raean Bilbrey
All State Signs Great Falls, MT
ESCO Manufacturing has been our channel letter fabricator for over 12 years. They are an exemplary company that manufactures high quality products and we have been completely satisfied with their customer service. Their staff is knowledgeable and able to handle any request. We are happy to recommend their services.
Jerry & Marlene Sandmann
Sandmann Signs & Electric Inc.
I have used ESCO Manufacturing for the better part of 20 years as an outlet for sign projects when we are overloaded and have seen nothing but the best of Quality, no shortcuts on the manufacturing process and as always very easy to work with sign professionals.
Kirk Ronning
Indigo Signworks
We have worked with ESCO Manufacturing with many of our projects and have had great results. Our account rep has been great to work with providing ideas and giving us a great product. It's been a pleasure to work with ESCO and I highly recommend!
Christian Guenther
AP Design
My companies have worked with ESCO for many years. We have collaborated on many projects, receiving professional knowledge and products in a timely manner. From answering an install question while on the job site to planning and discussing initial project concept sketches, ESCO has always been able to offer me the know-how to offer my customers a professional experience! Thank you ESCO!
Cathy Krommenhoek
Total Motors
From the sales to fabrication, to shipping, and accounting departments, the entire process has been seamless. At any given time we can see exactly where our job is in the process. Over the years, your team has displayed nothing but professionalism. Thank you, ESCO, for being a vendor we can count on consistently. We look forward to our relationship continuing!
Haley
Affordable Signs
View Testimonials